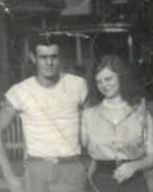 During his working years he was a mechanic.  He enjoyed fishing, wood working, and bird watching.  He loved to build things and talking on CB radios.

A Funeral Service will be Monday at 10:00 a.m. in the Chapel of Doty Southside Funeral Service, 2180 Batesville Blvd, Southside, with Bro. Jim Swinea and Josh Swinea officiating.

Burial will be in Barnes Cemetery in Bethesada.

To order memorial trees or send flowers to the family in memory of Carl Glen Wallis, Sr., please visit our flower store.